The many letters and messages of gratitude from businesses and the general public directed to the Strand Business Improvement District, is a testimony that the SBID’s public safety and operations teams are now well-established in the area and their efforts are showing positive results.

Since the establishment of the Strand BID six months ago on 15 October 2014 the SBID’s public safety team and Law Enforcement Officers worked hard in establishing a solid partnership. Bi-weekly public safety forum meetings are held where urgent matters are given priority and action plans drawn up.

The general patrolling of the Strand BID area is a common sight and many issues, such as drinking in public, drug dealings and assaults are dealt with by officers who are on alert throughout the day. Various successful joint operations are being conducted with the Law Enforcement officers who were recently appointed by the Ward councillor.

The SBID’s public safety officers and their partners from Law Enforcement surely have their work cut out of them and apart from ensuring that they are visible on the streets, they also tackle other daily issues, such as: 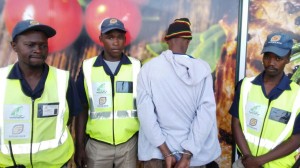 A recent arrest by the SBID’s public safety team.

There is, however, still ongoing challenges that requires constant attention and solutions, such as people drinking in public, vagrants sleeping on business premises, public spaces or in unoccupied buildings, to name but a few. And while the SBID team is trying to eradicate drinking in public, some liquor stores keep on selling cheap liquor – hence adding to the problem.

Help us improve our CBD
THANK YOU SBID TEAM!

Help us improve our CBD
Scroll to top